Long-distance, state-to-state moves saw an increase this year, according to new U.S. Census Bureau data. Some states came out clear winners as they gained more new residents over the year.

MoveBuddha analyzed more than 400,000 relocation queries in 2021 to compile its 2021–2022 moving migration report to see the top growing and declining states and cities across the U.S.

Florida continues to post significant gains in new residents. It had the largest year-over-year growth for the ratio of inbound to outbound moves, jumping 43 percentage points from 2020 to 2021. In other words, more than twice as many people moved to Florida than left it, researchers note.

But in 2021, it was Montana that had the highest net inflow of moves per capita, with 73% of inbound moves. Billings, Mont. was the number one destination, according to MoveBuddha’s analysis.

Researchers note that, in general, Americans appear to be fleeing states with extremely high populations and close quarters in favor of areas with more space to spread out and those that have looser COVID protocols, such as Florida and Texas.

California is the comes in at -52% of outbound mover looking to move out of state. 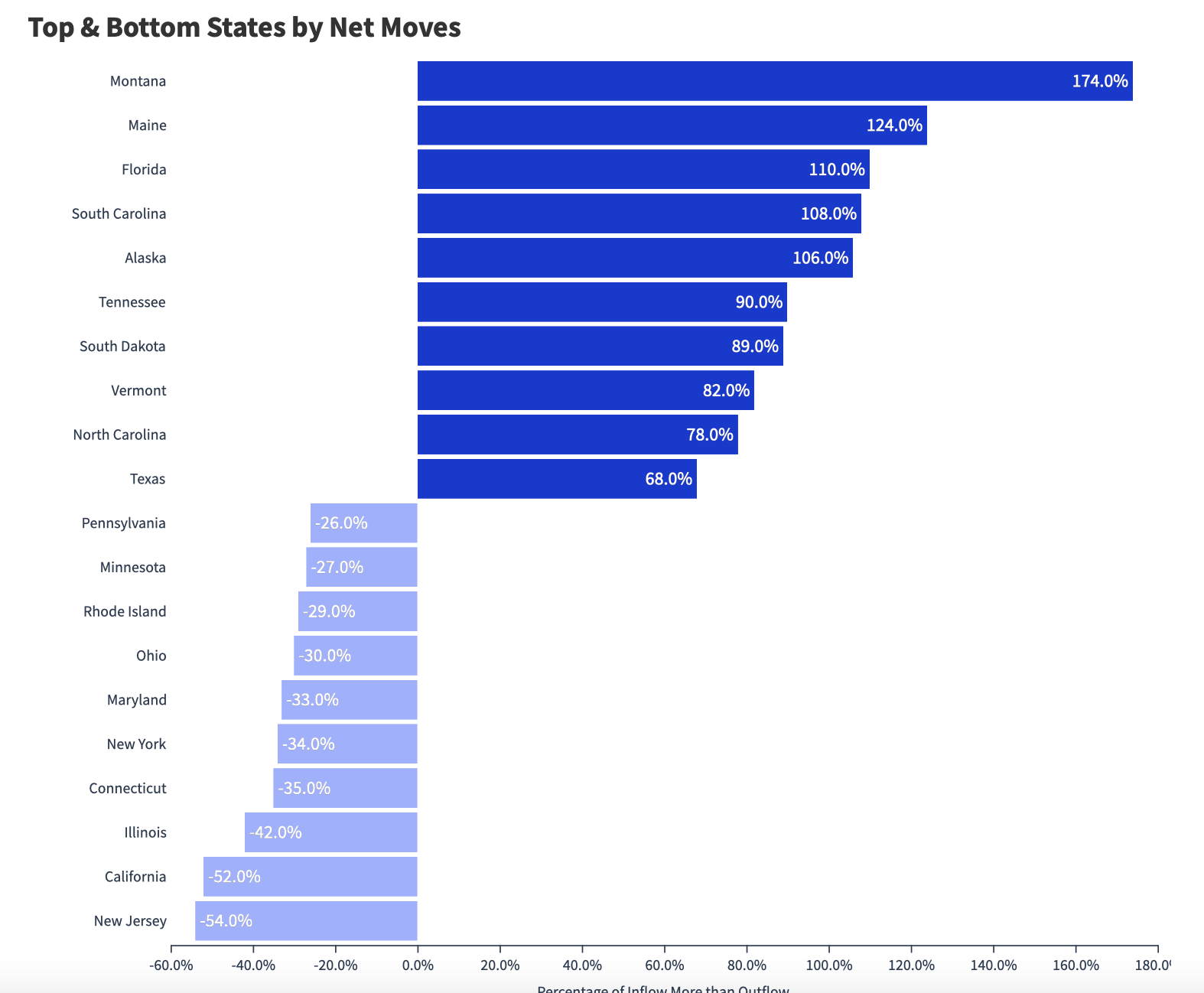 On a city-to-city basis, MoveBuddha researchers looked at the cities with the most inflow of new residents in 2021. These are cities that are keeping existing residents while attracting new ones at some of the highest rates.

Related Articles
Uncategorized Staging to Sell with Inspo from 5-Star Hotels Hotel and interior design experts offer tips for staging primary bedrooms with touches of luxe.   Recently, furniture and home decor company, CB2(link is external), named “luxury for all” as one of the top three home trends of 2022. The brand’s popularity with millennials, who currently comprise the largest percentage of home buyers(link is external), […]
Uncategorized Buyers May See ‘Whirlwind Year’ Home buyers hoping for a less competitive market before they make their move may be disappointed. The housing market remains unseasonably hot over the typically slow winter period. In the January just concluded, the typical U.S. home sold faster than in any other January on record, according to realtor.com®’s monthly housing report, released Tuesday. “We’re […]
Uncategorized Best Paint Colors for Selling in 2022 Greens may dominate paint firms’ lists of the hottest color of the year, but neutral colors still reign for the largest buyer pool. Eighty-one percent of interior design experts recently surveyed say whites and creams are the best colors to use when selling a house in 2022, according to the Paint & Color Trends 2022 […]